Understanding the MLM Model: How to Know if a Business Opportunity is Right for You 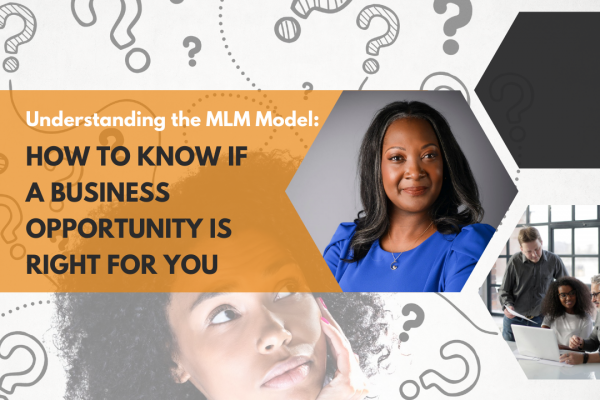 In case you missed it, there’s a relatively new docuseries about LuLaRoe, an MLM company that has been accused of being an “illegal pyramid scheme.”

Ever hear of Avon or Mary Kay? Amway or Shaklee? Arbonne or Rodan + Fields? What about Scentsy or LegalShield?

MLM companies aren’t in any ways new. Early on, door-to-door salesmen (yes, they were pretty much always men) hawked insurance policies, vacuum cleaners, cleaning products, toiletries, vitamins, and health aids, and various and sundry … sundries. Many of these salespeople were able to make quite a decent living, although they were typically only paid a percentage on each sale.

Then along came a vitamin company (originally Nutrilite, which soon gave rise to Amway, which eventually bought out the original Nutrilite company) that came up with a new approach to sales. The owners speculated that the people who buy (and genuinely seem to like) their products would probably be the best people to also sell the products and recruit others to sell them! And somewhere around 1945, they started using what is now known as the “MLM” business model.

MLM simply stands for “multi-level marketing.” So, by definition, “MLM” means the business relies on each distributor to generate revenue in multiple ways.

Nowadays, the typical MLM company works a little something like this:

But how do you know when a “business opportunity,” “income opportunity,” or “investment opportunity” you’re considering is actually a multi-level marketing company? If the company uses one of these types of “opportunities” as a selling point, it is very likely an MLM company. More important, if the company would expect you to both sell and recruit others to sell (hence, the “multi-level” aspect of marketing) it is almost certainly an MLM company, especially if you would likely generate more income through recruiting than you would through selling.

All MLM companies use the pyramid-style business model, but they are not necessarily “illegal pyramid schemes.” According to the Federal Trade Commission (“FTC”), pyramid schemes are illegal in large part because they are not sustainable. Just think about it. It is impossible to recruit the world’s entire population, right? In that sense, every pyramid is always inevitably just a few steps away from completely collapsing. This makes pyramid-style business models undeniably riskier than regular employment, and oftentimes riskier than a lot of other types of business endeavors.

Multi-level marketing companies are not hurting for money. The problem, however, is that not many of their distributors are joining in on all the financial success. A 2011 study claimed that, at that time, more than 99 percent of people who become distributors for an MLM company actually lose money.

So where is all the money going? With illegal pyramid schemes, the few lucky people at the top levels of the pyramid often end up absconding with all the money, leaving tons of not-so-lucky people on the lower levels of the pyramid with little to no return on their investments. MLM companies are not terribly different, as the return on investments is disproportionately top heavy.

You’re probably thinking about that one person you knew or heard about who earned a pink Cadillac from Mary Kay or “retired early” from some other MLM company. Yes, earning a lot of money as a distributor for an MLM company is possible. But earning a lot of money consistently and long-term is not very probable. Even MLM distributors who managed to rise up in the ranks to being some of the high earners often report that the high earnings didn’t last long. Some were lucky enough to get out while the getting was good. Others stayed too long and, subsequently, spent a fortune chasing success that they were never able to reproduce.

Ultimately, the model is designed to distribute the majority of the wealth amongst those at the top – the founders, the executives, and a few of the distributors who were early investors. When other distributors make a lot of money consistently and long-term, it's usually in spite of the business model, not because of it."

The common sentiment amongst anti-MLM supporters is that multi-level marketing companies should be outlawed, or at least highly regulated. Many seem to feel that, just because an MLM company isn’t an illegal pyramid scheme, that doesn’t necessarily mean it is a great “investment” (hence the need for more regulation). But just as many seem to feel that all MLM companies are illegal pyramid schemes (hence the need for them to be banned).

Regardless of which side of the white picket fence you might fall on, it seems pretty clear that most MLM companies don’t just sell products. They sell work-from-home, flexible hours, work-life balance, happy spouses, college funds, vacations, designer clothes, financial freedom, early retirement, generational wealth, and earning potential limited only by each distributor’s willingness to pound the pavement. MLM companies sell dreams and, if the statistics are to be believed, very often to women whose dreams have been deferred or dashed.

This is absolutely not to say that MLM companies have specific intentions of exploiting the vulnerable. It is simply to say that anti-MLM supporters believe the laws should be doing more to prevent MLM business practices that have an obviously disparate impact on the vulnerable, intent or no intent.

You are probably asking yourself whether these companies are really as bad as anti-MLM supporters say, since the law continues to allow them. Maybe. Maybe not. However, the FTC has had its eye on illegal pyramid schemes and MLM companies for quite some time.

Interestingly enough, the FTC created an exception to the business opportunity rule. Many people, including most anti-MLM supporters, believe that the exception has allowed questionable MLM companies to fly under the radar and avoid being pegged for illegal pyramid schemes. For example, an MLM company is not likely to be deemed an illegal pyramid scheme if its distributors are selling or using 70% of their products. (That way, distributors do not overinvest and end up stuck with products they don’t want and can’t offload.) But many MLM companies get around this threshold with company policies that require distributors to “use” the products in certain ways. A distributor for an MLM company that sells clothing might have a closet full of the company’s merchandise, and the company can argue that the distributor legitimately needed to buy all that merchandise because s/he needed to be a walking billboard for the company.

Alas, the business opportunity rule has come to its 10-year review date, and there is a huge push to get the FTC to tighten its reins on MLM companies. Given all the recent hubbub surrounding companies like LuLaRoe, there is quite a bit of speculation that the anti-MLM supporters might be pleased with the results of the review.

Return on (your) investment

Even with a legitimate MLM company, you could see poor return on your investment. So be sure to properly vet any MLM company before you join, so that you have a clear understanding of what you are signing up for. Here are a few tips.

Also, you will probably be given some sort of distributor agreement to sign. Take as much time as you need to review it and ask as many additional questions as you need to feel comfortable with the offer. If you think you would like to have an attorney review it, do it before you sign.

Lastly, if you believe your business opportunity is an MLM company that is an illegal pyramid scheme, you may have legal recourse. Depending on your circumstances, you may need to report the company to the FTC, file a claim with the Direct Selling Self-Regulatory Council (“DSSRC”), or file a lawsuit. An attorney should be able to advise you on your best options.

Feel free to contact N’kia to discuss your business’ legal needs. She can be reached at: nkia@parlatorelawgroup.com or 919-335-6399.

N’kia is Partner with Parlatore Law Group and dedicates her practice primarily to business law concerns, including business formation and development, employment, board licensure, unfair competition, contract formation and disputes, and intellectual property. She also handles a variety of general civil litigation matters, with her special interest being defamation (libel and slander). Her well-rounded legal background makes her well-equipped to meet her clients’ diverse needs. To learn more about N’kia, click here.