Defenses to Defamation: Breaking Down Truth and Privilege 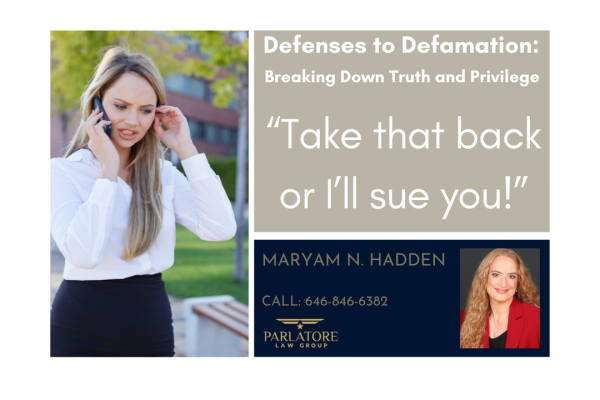 When is a threatened lawsuit something to be concerned about, and when is it an idle threat?  What do you do if you’ve been threatened – or even worse, served – with a lawsuit accusing you of defamation?  The first and easy answer, of course, is to speak to a lawyer who focuses on these kinds of cases and who can walk you through the law in your particular state, as there are some small differences.  But there are also general rules that might help you take some deep breaths and stay calm until you get to that lawyer.  There are several defenses that apply to defamation claims and chances are good that one of them will be a fit for you.

But what if your statement wasn’t true?  No need to panic yet, there are still plenty of possible defenses.  Did you know (or should you have known) that the statement wasn’t true when you published it?  If not, and you were innocently passing along false information, most of the time you won’t be liable for making a mistake.

What if the statement was false and you knew it wasn’t true, but you took it back?  This is called retraction, and it’s another possible defense to a defamation claim.  Making a retraction is a defense because it can cancel out the harm of the original defamatory statement to the person suing you.  It could even improve the reputation of the person claiming to be defamed.  Since retraction has this effect, and since in most cases a defamation plaintiff must prove damages, printing a retraction can go a long way towards reducing any financial exposure you might have.

Another possibility is that your statement wasn’t a factual statement, but an opinion.  “Johnny stole my wallet” is a factual statement, but “Johnny is a jerk” is an opinion.  Opinions can’t be the basis for a defamation suit.  Just be aware that putting “I think” or “I believe” in front of an otherwise defamatory statement and then printing it probably won’t be enough for you to claim the opinion defense as a shield.  You don’t want to try to get cute with the rules and have a court slap you down for it.  It isn’t worth the risk.

The second kind of privilege, qualified privilege, only applies to statements made in certain circumstances without a higher level of intent (that level changes depending on the specific state’s defamation laws, but malice and recklessness are both common answers).  Qualified privilege can cover media reporting of the news (information about which there is a public interest or reports about official proceedings) or statements that, although private, are protected for public policy reasons (such as a job reference from a former employer or statements made in self-defense).  Testimony in legislative proceedings (unlike judicial proceedings, which are covered by absolute privilege) is another area where qualified privilege applies, as are statements by professional critics of cultural works – a book or movie reviewer, for instance.

One more possibility, although less common, is if you can prove that the person consented to your publishing of the statement about them.  In that case, their suit against you (if they change their minds after consenting and decide to sue) will fail.

Being sued or threatened with a lawsuit is never a comfortable position to be in.  No one wants to see a process server on their doorstep!  But defamation claims can be difficult to win because there are so many possible ways to defend them.  So, while avoiding the suit (or the threat of one) is always the best position to be in, if you do get that knock on your door at least now you have some ideas about how to arm your lawyer.

To speak to a lawyer who focuses on these kinds of cases and can walk you through your legal options, contact Maryam Hadden at Maryam.hadden@parlatorelawgroup.com or call 646-846-6382.

Maryam Hadden is a partner with Parlatore Law Group and brings nearly a quarter of a century of experience in litigation to work for you. Ms. Hadden's practice area concentrations are investigations, white collar litigation, appellate work, and civil litigation. She has a wealth of courtroom experience with a solid record of success.