The Social Media Digital Footprint: How What you say Online can Lead to Legal Consequences 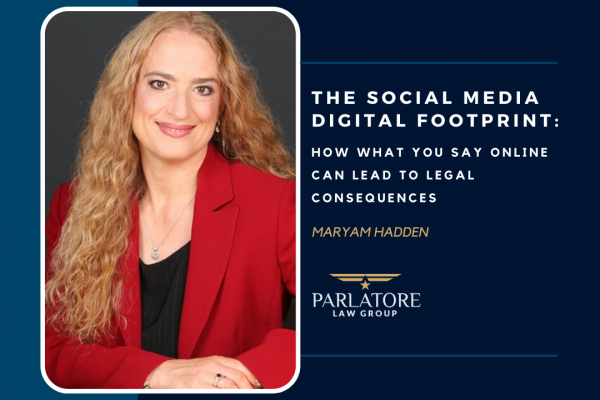 When does “Insta-bullying” cross the line and put you at risk of being sued?  Back when I walked uphill both ways in the snow to get to school, there was no internet, no cyber-harassment, and bullying for the most part didn’t follow you home.  It’s a whole new world now.  Between the spread of social media platforms that grant instant access to hundreds or even thousands of followers, the 24/7 availability of information, and the fact that about 80 percent of the world’s population now has a smart phone (at least, according to bankmycell.com – I Googled it), it has never been easier to make your opinions known.  It can feel great – such a relief! – to get that anger or stress or fear or whatever out of you and send it out into the world.  No consequences, right?  You’re just using your right to speak freely, right?

Not always. That 2:00 am tweet, the post you put on Facebook or your latest Instagram reel can come back to haunt you.  And not just that feeling you get the next morning when your cooler, more rational self takes over and you feel guilty kind of haunt you.  I’m talking about something that can affect you in the long term.

Of course, there is the risk of long-term effects that parents and teachers warn teens about, often with about as much success as most parental warnings.  Once something is on the internet, its there forever, for every future college admissions representative, employer, or possible romantic interest to find and judge you for.  Even if you have a great explanation, just having to give it can be embarrassing and put you in an unnecessarily poor position.  That’s a very real risk and careless posts can cause very real harm to future you.

That’s not the kind of harm I’m talking about, though.  I’m talking about legal risks.  Let’s say you had a bad day, and during that bad day that guy you never liked bumped into you on the street.  He didn’t even say “sorry!”  As you’re boiling over later on, you decide to vent about it online.  But then you decide to jazz it up a little.  After all, bumping into you and not apologizing was rude, but people might not get as upset about it as they should.  So you decide to stretch the truth a bit.  You end up posting/tweeting/however you get it out there that he bumped into you AND after that you couldn’t find your wallet.  He probably stole it!  Just a little harmless exaggeration at the expense of some jerk no one likes anyway, right?

Wrong. What you just did is called “defamation” – you knowingly published a false statement about someone that could damage them.  That moment of spite could have far-reaching consequences, not the least of which is opening yourself up to a lawsuit.  That guy you didn’t like could sue you for publishing a false statement about him; for libeling him.  What’s worse, you falsely accused him of committing a crime.  False accusations can spiral out of control quickly.  Let’s say the police approach you about the post.  Do you admit that it was a lie?  Do you stick to your story and file a false police report?  (Spoiler alert – don’t pick that second option.  It’s a crime to file a false report with the police and you could wind up being the one arrested.)  If you do make a bad decision worse and file the false report, at what point do you come clean and admit that you made it all up?  When an innocent person is facing jail?  When you are?  When someone finds your wallet and freaks out?

Facing a defamation claim isn’t the only risk of using social media to blow off steam.  Defamation has to be a false statement, and it has to be a statement of fact, not just an opinion.  So maybe you’re thinking its ok if you just say what happened.  Put it out there so that everyone knows what a jerk the guy is, but don’t say anything untrue.  After all, you see similar posts all the time, calling people out for bad driving or not cleaning up after their dogs or whatever someone may have done that bothered someone else.  And if it stops there, you’re probably right.  One truthful post complaining about someone might help you feel better without really causing any harm.

But what if you take it further?  One of the problems with social media is how addictive it is to get that little “feel good” boost from people “liking” your post/tweet/reel/etc.  Then you get some supportive comments.  People get how you feel!  And they feel that way too!  What if the next time around, you get even more support?  Social media platforms rely on just that addictive boost to keep users active and to keep expanding their reach. From a business perspective, more active users mean more money being made by the company; so every platform has the goal of bringing you that rush of satisfaction and does everything it can to make it easy to retweet, repost, share and the like.

So let’s say that your post about the rude sidewalk bumper was a popular one.  Maybe the next time you see him, you’re watching to see what else he might do that you could post about.  Part of being human is making mistakes, so if you’re watching for something you have a good chance of finding it.  You put up another post.  And another.  And another.  You’re not crossing that line into lying about your target, but you are definitely not being complimentary either.  How many posts does it take before you’ve crossed the line into bullying?  What about harassment?

Bullying in and of itself may not be illegal, but it’s certainly not constructive behavior.  And you never know how the target of bullying will handle it.  Some people may let it roll off their backs and not react, but others can suffer depression or anxiety at best and consider suicide at the worst.  Obviously causing that kind of reaction is a worst-case scenario – but it is a possible one.  Bullying someone is just never a good idea.

Once you cross the line into harassment, you’re looking at legal consequences again.  Depending on the laws in your state, you could be facing fines or jail time in addition to a possible lawsuit from the target of your comments.  Figuring out when you’ve crossed that line isn’t always easy.  In New York, for example, harassment can be established by repeatedly committing acts that “alarm or seriously annoy” another person and which serve no “legitimate purpose”.  “Seriously annoy” is a pretty low standard, and it would be very hard to argue that a string of insulting social media posts served a legitimate purpose.  If you were threatening physical harm (“I want to punch him in the face” for example) the level of the offense could go up.  While each state has its own legal definitions, harassment is one of those offenses that is usually broadly defined and vague.  In Texas, for another example, acting with the intent to “harass, embarrass, torment, alarm, abuse or annoy” can put you at risk of legal action.  Because of these general definitions, a string of social media posts that seemed like a good idea at the time – or at least a safe idea – could put you at real legal risk.

In short, I’m going to end up sounding like my mother – if it isn’t nice, don’t say it.  Or at least, be REALLY careful if you choose to say it on social media.  And you know that saying “you can’t stop at just one?”  It isn’t true.  You can.  You should.  If you didn’t, consider whether it’s time to call a lawyer.