What Is Employment Sponsorship? 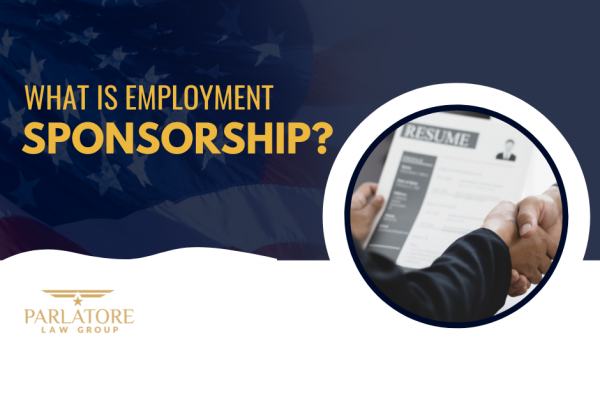 What Is Employment Sponsorship?

For a foreign national to obtain a job in the United States, the person must usually obtain sponsorship from a U.S. employer. Employers who want to hire foreign nationals must submit an application with the U.S. federal government and meet certain requirements for sponsorship. This article discusses how U.S. employment sponsorship works.

What Are the Requirements?

To obtain authorization for a foreign national to work in the United States, employers must submit various forms of documentation showing that they have a certain job opening that they need to fill and that a foreign national can fill that job. For some employment work visas (but not all), the employer must show that it tried but could not fill the position with a qualified American worker. Employer sponsors will help the employee complete their work visa application, prepare the labor certification documentation, and submit the petition for the visa.

What Types of Employers Are Eligible?

Any U.S. employer willing to provide sponsorship for visas can do so as long as they take all the steps necessary to obtain the sponsorship. The most common types of employer sponsors are tech companies, consulting firms, investment banks, financial service companies, manufacturing companies, and education employers. Some employers, like universities or other non-profits, do not have to file a Labor Certification, and can more easily hire foreign workers.

Employers must typically go through the following steps before they can become visa sponsors:

What Is a Visa Sponsorship Letter?

The United States government grants nonimmigrant visa employment sponsorships where the employer wants to offer a job to a foreign national. However, the foreign national is not seeking permanent residency or citizenship in the United States in this situation. Therefore, a nonimmigrant visa employment sponsorship is typically given to a person who is only moving temporarily to the United States just to work for this company and maintain the intention to leave the U.S. if or when the job terminates or when the visa expires.

For most nonimmigrant employment visa sponsorships, the employer must submit what is known as Form 1-129, Petition for Nonimmigrant Worker. Also, some temporary visa categories require employers to obtain a labor certification from the Department of Labor (”DOL”) before petitioning for a work visa on their behalf. A labor certification verifies that there are not enough available, qualified, and willing U.S. workers to fill the offered position. The certification also states that hiring a foreign worker will not adversely affect similarly employed U.S. workers’ wages and working conditions.

Immigrant visa employment sponsorships are generally for persons who want to remain in the United States permanently and who will have the opportunity to obtain U.S. citizenship in the future. Certain immigrant visas require employer sponsorship. For immigrant employment visa sponsorships, the employer must submit a Form I-140, Immigrant Petition for Alien Worker, or an I-360 Petition for Special Immigrant. Most immigrant visa categories also require employers to obtain a labor certification from the DOL before petitioning for a work visa on their behalf, similar to the labor certification described above that verifies that there are not enough available, qualified, and willing U.S. workers to fill the offered position.

The United States government grants nonimmigrant visa employment visas to certain applicants without employee sponsorship. The applicant himself must apply for these types of visas themselves (self-petitioning) if they qualify. Hiring an immigration attorney to help prepare these complicated petitions is highly recommended.

The following types of nonimmigrant visas do not require employer sponsorship:

How Long Is the Sponsor Visa Valid?

The answer is it depends on the type of sponsor visa you have, although most will expire after a certain time period, so make sure you don’t overstay your visa period.

For example, an H-1B visa, the most commonly used nonimmigrant visa, is valid for three years, with the possibility of extending the visa for up to six years. Other types of sponsor visas are only valid for one year, while other visas can be renewed indefinitely.

How Can I Get a Sponsor Letter?

Obtaining a sponsor letter can take a long time, and it can also be very costly for employers. Usually, an employer will hire an attorney to put together the documents that are collectively referred to as the sponsor letter.

Before obtaining a sponsor letter, an employer must first offer you a job in the United States. The sponsorship documents will often contain the employment contract, a statement describing the employee’s qualifications, etc. The employer will obtain the Labor Certification, and then will submit the sponsor letter and work visa petition to USCIS, which will then process the petition. Because of a high backlog, this can sometimes take months.

The USCIS will notify the employer and employee once they have approved the petition. Once approved, the non-U.S. employee then starts the visa application process at the U.S. embassy or consulate in the country where they live.

How Much Does It Cost?

Obtaining a sponsor letter is expensive. Fees typically range from $4,000 to $9,000, depending on whether the employer has more than fifty employees, with half of those being foreign nationals. The good news for applicants is that the employer/sponsor usually pays the costs. Costs may include the following, depending on the type of visa and the employer’s size:

How Long Does It Take?

In general, non-immigrant visas take less time to apply for than permanent immigrant visas. The lottery based visas like the H1-B can only be filed in one or two times each year for the worker to start 6 months later. However, Labor Certifications themselves can take many months to obtain, so the planning process must start much earlier than the application date. Based on how many applications are filed each year and how many visas are allowed to be issued in each category, waiting times may be months or years for some types of visas. Consult the USCIS Processing Time website for each type of visa and the Service Center where it will be adjudicated. In addition, consular processing may take months or longer depending on the appointment backlog created during the Covid Pandemic when most consulates were closed.

Is It Difficult to Get One?

While it’s not necessarily difficult to obtain a sponsor letter, it can be time-consuming and expensive for the employer. For this reason, some employers don’t offer work sponsorships for foreign nationals. Also, for H-1B visas and H-2B visas, which are the most common type of work visa granted, there is an annual “lottery.” This refers to a random selection process where only a limited number of foreign workers get chosen each year to receive an H-1B or H-2B work visa. Unless an employer considers you an extremely valuable hire, the employee is not likely to open a position indefinitely while waiting for you to be chosen in the lottery.

Virginia Jijón-Caamaño is a partner with Parlatore Law Group and practices in the field of immigration law, helping both individual clients, as well as businesses to navigate this constantly evolving area of the law. She assists individual clients in navigating confusing immigration regulations and applications. Her practice entails organizing all types of visa submissions. Virginia works tirelessly to deconstruct complicated immigration options, opportunities, and pitfalls, to compile thoroughly documented application packages. She also handles naturalization applications, and DACA work permit renewals. For more about Virginia, click here.